Since 20th century depression is as the major psychiatric disease, affecting eight million people approximately in North America. In the case of depression, adults suffering from psychiatric illness are more prone to death from suicide or accidents than the adults not having any psychiatric disorder. Major depression, including bipolar disorder, often appears at its initial stage during adolescent age, and has severe effects on later morality and morbidity.

Depression has actually raised the rate of suicide in adolescents.
In the present times adolescent suicide is more evident for deaths of youths aged 15 to 19. Through the recent survey, it is clearly shown that 20% of common adolescents in are suffering from emotional disorders or problems. Depression leads to the serious problems that include difficulties in work and workplace, school, and personal adjustment that continues till adulthood.

Adolescence is an age or time that brings along with it mood swings, emotional turmoil, gloomy introspection, heightened sensitivity, and great drama. It indicates behavioral experimentation.

The diagnosis of teenage depression not only a part of formal clinical interview but a close study of the person affected by his parents, community advisors, and teachers.

The premorbid personality of the patient must be closely observed and taken into account.

In this case therapeutic alliance is important because the adolescent usually will not be ready to share their feelings with any adult or a stranger unless they have trust or any kind of rapport with them.

Faith and confidentiality should be there in order to treat them with the best possible methods.

The diagnosis will further require many precautions while dealing with the patients of depression.

The Common Symptoms of Adolescent Depression

Depression has essential symptoms in adolescents and in adults.

* Pervasive sadness may be epitomized with the black clothes, composition of poetry with diseased themes or music with nihilistic themes.
* Sleep disturbance visible through by watching television all-night watching, getting up late and with difficulty for school, or sleeping throughout the day.
* Lack of energy level or motivation.
* Loss of concentration and unable to think properly.
* Boredom.
* Loss of appetite that eventually result in anorexia or bulimia.
* Adolescent depression can also be observed through conduct or behavior disorder, alcohol abuse, family turmoil.

In this kind of complicated depressive episodes, formal psychological testing will prove to be of great help. In the cases that are difficult most to handle, a trial of a treatment is required to prepare an effective study of the patient suffering from clinical depression or emotional turmoil.

9 Clear & Early Signs Your Depression is Turning Into Bipolar Disorder

Did Your Mother Experience the Same? Is Postpartum Depression Hereditary? 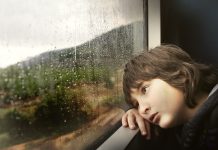 7 Signs That Your Child is Slowly Getting Into Depression

Cleanliness And Precautions Are The Key To Dealing With Asthma

How to Recognize Pure Saffron From Fake (And its Miraculous Uses...